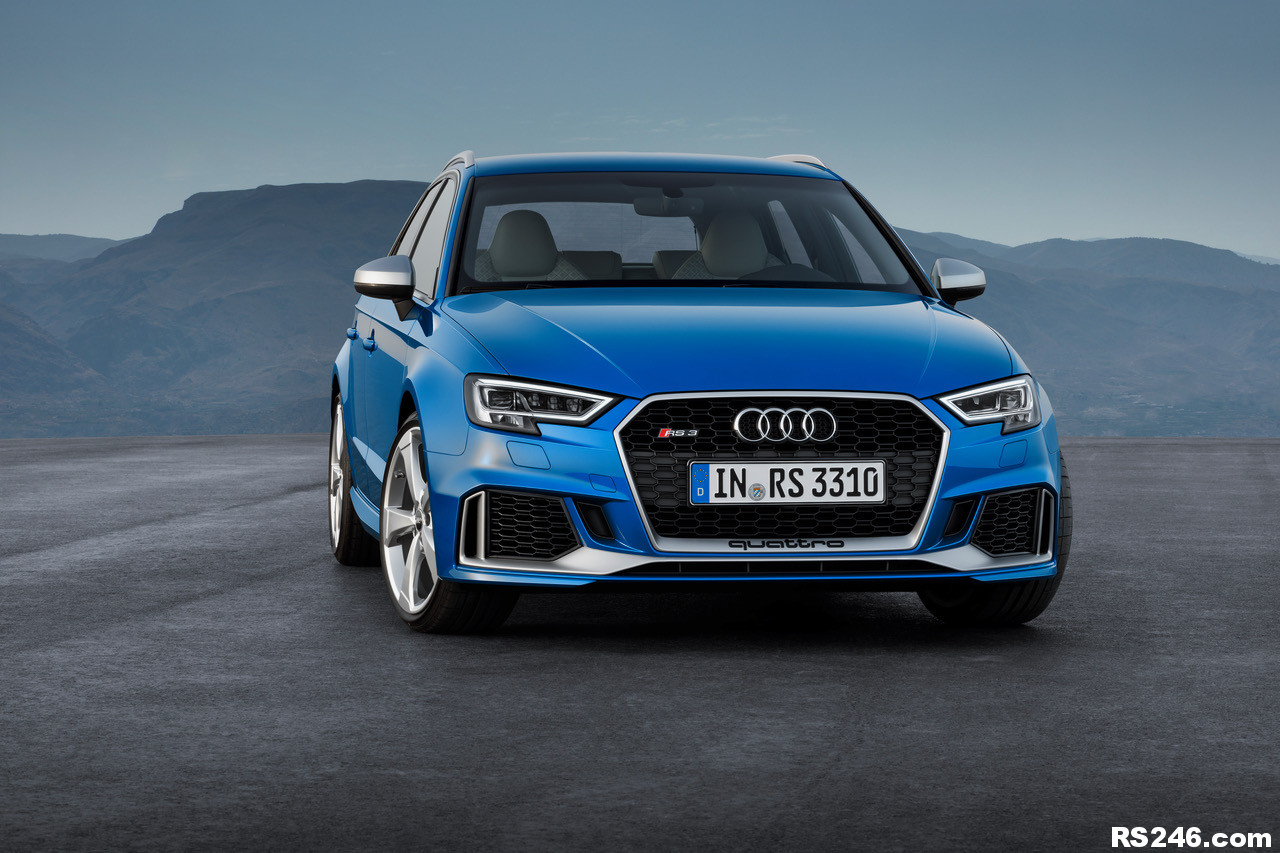 · Wider track and pronounced sills are hallmarks of the RS design

· UK ordering possible from the summer, first deliveries later in 2017 The RS 3 Sportback – the original entry point to Audi RS ownership – has taken a back seat recently to allow the new RS 3 Saloon its share of the limelight, but at next month’s Geneva Motor Show the muscle-bound five-door will make its comeback emboldened by the latest 400PS five-cylinder TFSI engine and a raft of design and connectivity upgrades. Following its world public debut in Switzerland on Tuesday March 7 the Audi compact segment spearhead will become available to order in the UK in the summer and will touch down here towards the end of the year.
“The Audi RS 3 Sportback offers our customers an attractive introduction to the RS world,” said Stephan Winkelmann, CEO of Audi Sport GmbH. “Since 2011 the sporty compact model has proved itself extremely successful on the market. And with the new five-cylinder engine, the Audi RS 3 Sportback is at the head of its class and continuing that strong track record.”
From 0 to 62mph in 4.1 seconds
Behind the impressive performance of the Audi RS 3 Sportback is the world’s most powerful production five-cylinder engine – the 2.5 TFSI. It delivers 400PS – 33PS more than its predecessor – and is 26 kilograms (57.3 lb) lighter thanks to its aluminium crankcase, among other features. Its maximum torque of 480 Nm (354.0 lb-ft) is available from just 1,700 rpm and remains at the driver’s disposal right through to 5,850 rpm.
This wide tract of torque facilitates an exhilarating 4.1-second 0-62mph sprint time, the effect of which is heightened by the five-cylinder unit’s unmistakably full-bodied and characterful sound. Top speed is limited to 155mph, but if the optional dynamic package plus is specified a de-restriction to 174mph is among the extra features it brings.
For better mixture preparation, the new 2.5 TFSI engine employs dual injection into the intake manifold and into the combustion chambers. On the exhaust side, the Audi valvelift system controls the duration of valve opening depending on the throttle and engine speed – for moderate fuel consumption at low and partial load as well as optimal throttle response and a high level of tractive power at full load. In the New European Driving Cycle (NEDC) test the RS 3 Sportback returns 34.0mpg – a creditable figure considering its performance capabilities which equates to 189 grams of CO2 per kilometre.
quattro drive with variable distribution of power
The proven channels for the mighty engine’s output are the S tronic seven-speed dual-clutch transmission and quattro permanent all-wheel drive based on an electro-hydraulic multi-plate clutch which distributes the drive torque variably between the axles. The share it allocates to the rear axle automatically varies depending on speed and cornering forces, but its bias can also be influenced by the driver using the standard Audi drive select system, which can also influence the response of the steering, transmission, engine management, adjustable exhaust flaps and optional RS sport suspension with adaptive damper control. It offers three modes – comfort, auto and dynamic. Cornering attitude is also further enhanced by the Electronic Stabilisation Control (ESC) with wheel-selective torque control and the sport mode specially tuned for the RS. Wider track and sporty suspension setup
With its standard progressive steering and sophisticated multi-link suspension with wider front track positioning the stocky body 25mm lower than the A3, the RS 3 Sportback is set up to deliver compelling grip and adjustability with extraordinary poise. 19-inch alloy wheels framing 310-millimetre brake discs front and rear are factory fitted, and as an alternative customers will be able to choose carbon-fibre ceramic front discs.
Distinctive RS design
Externally, the flared front arches that evocatively link the RS 3 Sportback with its Eighties quattro coupé forebears continue to lend just the right air of power and purpose to the latest car, while subtle styling revisions based on the recent updates made across the A3 range also lift its look. The Singleframe grille with its gloss black honeycomb mesh and the large air inlets and angular sill trims which flank it are now also complemented by a redesigned blade in the bumper which serves to make the car appear even more broad-shouldered. At its ends it forms narrow, upright funnels. LED headlights with their distinctive lighting signature are standard, and matrix LED headlights are available from the options list. At the rear an elongated RS roof edge spoiler, a diffuser insert and the RS exhaust system’s large oval tailpipes add further emphasis to the high performance hatchback’s foursquare stance.
Lap timer, boost pressure indicator and special RS screen
In the equally focused cabin the two circular instrument dials with their black faces, white scales and red needles sit either side of a driver information system that includes a boost pressure indicator, an oil thermometer and a lap timer. In the latest car this configuration can now be replaced by the fully digital Audi virtual cockpit which is newly available. A special RS screen shifts the tachometer to the centre, displaying on either side the readings for torque, g‑forces and tyre pressure. When the S tronic transmission is operating in manual mode, a scale with a colour background prompts the driver to use the steering wheel paddle or selector lever to upshift when approaching maximum rpm.
Sport seats with RS seatback emblems in black fine Nappa leather are standard, and for even greater support RS sport seats with more contoured profiles and integrated head restraints for the driver and front passenger are available as options. The RS sport leather steering wheel is flat-bottomed and features buttons for operating the infotainment system. The main control element is the rotary/push-button control on the console of the centre tunnel. A touchpad can be integrated in its surface, enabling the driver to scroll, zoom and enter text. Also included is a free text search feature that automatically completes the user’s input after just a few letters have been entered. The voice control can process user questions and commands formulated in everyday language. Online with Audi connect
When it comes to infotainment, the RS 3 Sportback is even more versatile than before. The Audi Smartphone Interface is now standard, enabling users to access selected apps on their handsets from the car’s onboard monitor via Apple Car Play and Android Auto, and an LTE module brings the Audi connect services on board, including navigation with Google Earth and Google Street View, as well as information on fuel prices, weather, travel and traffic. The Audi MMI connect app lets users transfer their smartphone calendars into the MMI system. Drivers can also send destinations from Google Maps and special destinations to the navigation system, and also stream music from the internet. In addition, the navigation system includes a Wi-Fi hotspot that enables passengers to connect their mobile devices to the internet.
Other highlights include the Audi phone box for wireless connection to the car’s onboard antenna and inductive charging of handsets equipped to the QI standard, the Bang & Olufsen Sound System with 705 watts of power, and many driver assistance systems. In slow-moving traffic up to 40mph, for example, the traffic jam assist keeps the car at a safe distance from the vehicle in front and can briefly take over the steering. Also new in the Audi RS 3 Sportback are the emergency assist, which automatically stops the car if required, and cross traffic assist rear. The latter system looks out for crossing vehicles when the driver is pulling out of a parking space.
Market launch and prices
Orders for the RS 3 Sportback and the RS 3 Saloon will be accepted in the UK from the summer, and UK pricing for both variants will be confirmed closer to that point.

Check out this cool video of our members at Audi Driver International 2016 at Castle Combe.

Credit to FaisalJ for capturing the moment and creating the video.

More pics and discussion in our Trackdays and Meets section. 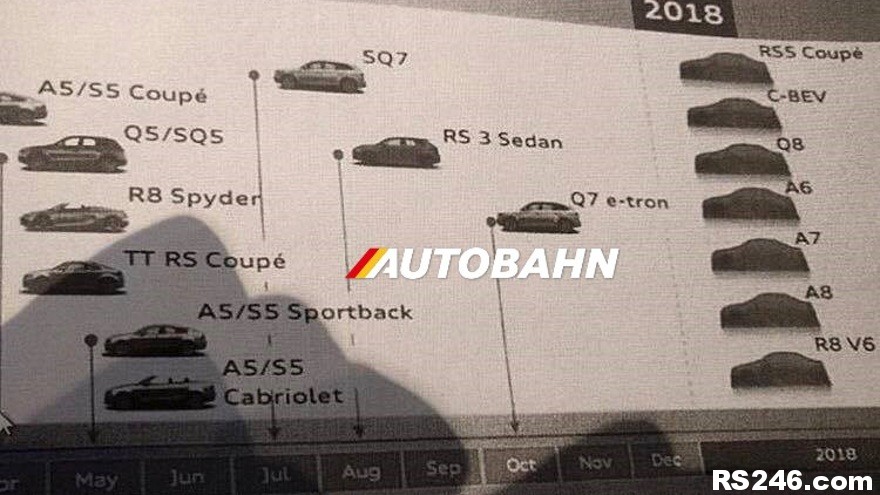 Here’s a drag race you might not expect…  A prototype Peugeot 308R HYbrid vs the Audi RS3 Sportback.  The test, a simple launch and drag race.

Some pretty committed driving here in what might be the 2015 Audi RS3 Sportback.