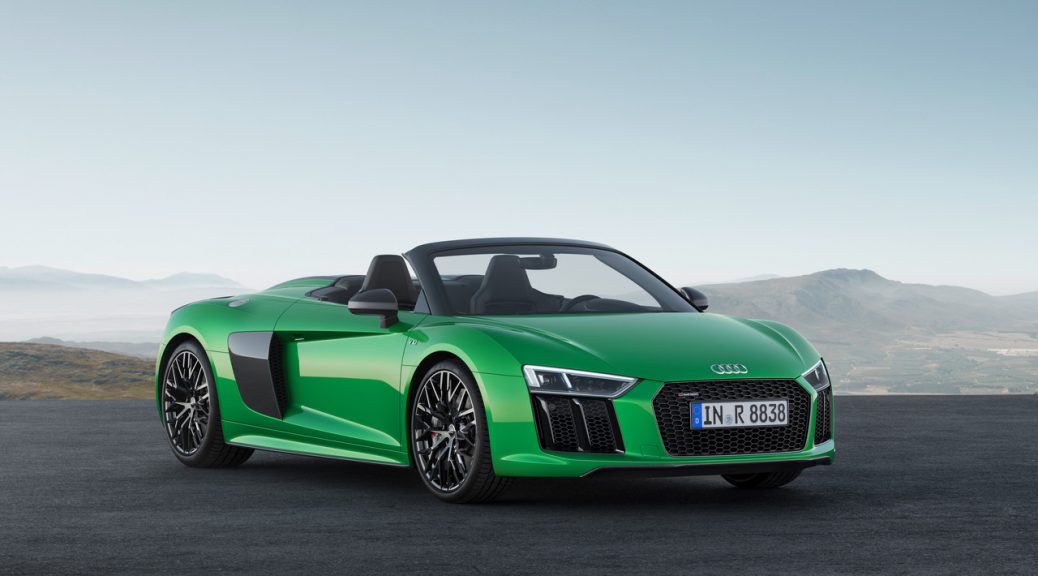 – New R8 Spyder V10 plus will open for UK order later this month priced from £147,470 OTR
– High revving, naturally aspirated V10 produces 610PS at 8,250rpm and 560Nm of torque at 6,500rpm
– 0-62mph in just 3.3 seconds and a 203mph top speed
– Exceptionally high levels of standard equipment include a Performance driving mode, R8 bucket seats, ceramic brakes and carbon components inside and out
– Multimaterial Audi Space Frame (ASF) with aluminium and CFRP weighing just 208 kg and with unsurpassed rigidity
– 25kg lighter than the Audi R8 V10 Spyder (dry weight: 1,587 kilograms, unladen weight (without driver): 1,695 kilograms)
– Powered hood opens or closes in just 20 seconds, at speeds up to 31mph
– UK ordering opens at the end of this month

The most powerful Audi engine ever destined for series production is about to raise the tempo in what is already one of the most intoxicating driving machines offered by the brand – the open-air, high intensity R8 Spyder is to adopt the gloriously vocal 610PS V10 from the R8 V10 plus Coupé. The new R8 Spyder V10 plus is capable of 0-62mph in a mere 3.3 seconds and a top speed in excess of 200mph, spurred on by its significant 70PS power advantage, and by a significant 25kg weight reduction, versus the ‘standard’ V10 Spyder.
Set to become available to order in the UK later this month, the R8 Spyder V10 plus will be priced from £147,470 OTR, and will feature a standard specification list that reflects the sporting credentials and premium positioning of this high-performance flagship. Highlights include R8 bucket seats, liberally applied carbon fibre-reinforced polymer components inside and out, ceramic brakes, the R8-specific Audi Virtual Cockpit and the option of an exclusive micrommata green paint finish for an even more cutting-edge look.
“The Audi R8 Spyder V10 plus completes the R8 model line,” said Stephan Winkelmann, Managing Director of Audi Sport GmbH. “The Spyder is now also available as a 610PS top version in addition to the Coupé. It benefits from our many years of experience in motorsport and combines breath-taking dynamics with the emotion of an open-top sports car.”

Ten-cylinder symphony
Incredibly high revving up to 8,700 rpm, and offering lightning-quick response coupled with an evocative, voluminous sound, the top V10 with its 610PS and maximum torque of 560 Nm is the most powerful series-production engine from the brand with the four rings. Compared with the Audi R8 Spyder V10, the naturally aspirated 5.2 FSI engine, with a high 12.7:1 compression ratio in the plus version, features a 70PS boost in power and a 20Nm torque advantage.
As a result, the top model sprints to 62mph in 3.3 seconds – 0.3 seconds faster – and achieves a top speed of 203mph, an increase of 6mph. In the NEDC, the R8 Spyder V10 plus returns up to 22.6mpg combined, which corresponds to CO2 emissions of 292 grams per km. Its efficiency technologies include the cylinder on demand (COD) system, which deactivates one cylinder bank at low to medium loads, as well as dual injection in the intake manifold and combustion chambers. If the driver eases off the accelerator at a speed of over 34mph, the engine disconnects from the drive and the new R8 Spyder coasts at idle with minimal fuel consumption. When the car comes to a stop, a start-stop system deactivates the V10 engine.
The oil supply is designed according to the dry sump principle, like that of a racing car. This enables the engine to be positioned extremely low, giving the car an extremely low centre of gravity – a requirement for the sporty and agile driving behaviour.

As you wish: customisation
With the Audi exclusive programme, the possibilities are almost limitless for customers to personalise their R8 Spyder V10 plus. In addition to the 11 regular paint finishes, the palette extends to freely selectable colours and matt-effect paint finishes. The convertible top is available in three colours, and the side blades can be selected in five colours. Like the door sill trim, the side blades can also be personalised with insignia as well as designed in colours according to customer tastes. In addition, parts in carbon or titanium black are available for many areas of the exterior and interior. Numerous upholstery types, inlays, and colours add to the wide range of options.
Aggressive look: the Audi exclusive micrommata green design package
The optional micrommata green design package lends the convertible high-performance sports car the ultimate edge. Its body is painted in a distinctive green. The anthracite grey Singleframe grille and black tailpipe covers create a sharp contrast. Audi exclusive furnishes the interior completely in black, in fine Nappa leather, which is perforated on control elements. Green contrast stitching accents the seats, centre armrests, doors and floor mats with luminous colour that matches the exterior.
Driver-focused: cockpit and controls
R8 bucket seats are fitted as standard in the flagship convertible. They are light, highly contoured, mounted low and bear the R8 embossing. They are upholstered in fine Nappa leather with special pigmenting that stops them from heating up in the sun’s rays. Decorative inlays are made from carbon; the pedals and footrest are in glossy stainless steel. The defining element is the “monoposto”, a large arc running around the cockpit. The dashboard appears to float weightlessly. Its lower section contains buttons and controls for the air conditioning, shaped like turbines.
As in a racing car, drivers can operate all important functions without having to take their hands off the steering wheel. The standard R8 performance leather steering wheel features integrated multifunction buttons as well as two large control satellites. The driver uses these to start and stop the engine and control Audi drive select. Two more buttons including a rotary wheel are used to control the performance mode and the exhaust flaps.
The large 12.3-inch, fully digital Audi virtual cockpit presents all information using rich 3D graphics – if desired, in a special performance view that puts the focus on the rev counter. It also serves as a gear shift indicator – when the seven-speed S tronic is being operated in manual mode, its scale has a colour background at higher engine speeds. Next to it are indicators showing output, torque, g-forces, lap times and the temperatures of the tyres, engine and transmission oil.
High bandwidth: infotainment and Audi connect
The standard equipment package for the R8 Spyder V10 plus includes a superb infotainment system – the MMI navigation plus with MMI touch. It features impressive and intuitive control logic with flat hierarchies. Added to this is a free text search that delivers suggested hits after only a few letters are typed in. The natural-language voice control function also recognises many terms from everyday speech. Standard seatbelt microphones provide for optimal audio quality, even when the top is down. In addition, the MMI navigation plus has an integrated Wi-Fi hotspot for the mobile devices of passengers.
The optional Audi connect module enables fast internet access via LTE. Its offerings include numerous services ranging from navigation with Google Earth and Google Street View to travel and traffic information as well as point-of-interest searches. In addition, the Audi smartphone interface also displays selected content from iOS and Android smartphones in the Audi virtual cockpit. The optional Audi phone box connects mobile phones to the on-board aerial and charges them inductively in line with the Qi standard. The Bang & Olufsen sound system provides an excellent audio experience – even while driving with the top down. It integrates two head restraint loudspeakers in each seat.
Handcrafted manufacture: the “Audi Böllinger Höfe” production facility
The quality of the R8 Spyder V10 plus fulfills the most stringent standards. The body and final assembly are completed in the “Audi Böllinger Höfe” production facility operated by Audi Sport near Neckarsulm. The processes are organised to be highly flexible so that individual customer requests can be fulfilled. About 500 highly qualified employees construct the cars by hand with meticulous care. Before they are delivered, each high-performance sports car is put through a stringent test procedure until their final test drive on public roads.